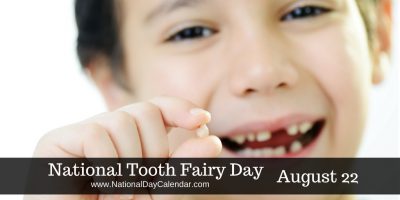 The Tooth Fairy came to life in 1937 in an eight page playlet by Esther Watkins Arnold.  At the same time, Sir Arthur Conan Doyle made his claim that fairies and gnomes were real by publishing pictures of two girls surrounded by “verified” fairies.  Schools started performing the play the following year and children started placing their newly lost teeth under their pillow, most hoping for a gift, and some hoping to actually see the fairy or gnome that visited.

I can remember wiggling a loose tooth until it was extremely loose.  My sisters or my mother would tell me it would bleed if I pulled it.  Oh well.  There was dime in the waiting.  What I didn’t realize that if I coaxed it out a couple of weeks ahead of itself, I would have a hole in that spot longer than I expected.  I guess the dime was more important at the time.

By the early 80’s when my children were loosing teeth, the fairy brought a quarter, but I know other children were already getting a dollar.  I checked in with my daughter and she said a dollar is the going rate, but my grandson never believed the fairy was real, so he doesn’t expect anything.  I think he needs to understand entreprenurialship better.

I was going through some boxes recently looking for a specific photo.  There were mementoes from my children’s childhoods; hospital bracelets, Brownie patches, Cub Scout troop numbers, perfect attendance awards from grade school, and a small round plastic container with some of their baby teeth.  My daughter’s response when I told her about them, was, “Gross.”  I’m wondering if she thought the Tooth Fairy should have thrown them away.