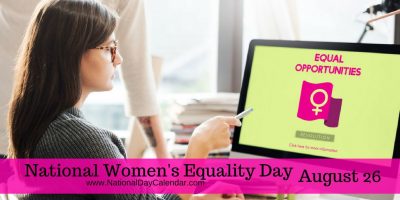 The United States Congress passed the 19th Amendment to the Constitution granting women full and equal voting rights on this day in 1920.  Every year on August 26, we commemorate this right with National Women’s Equality Day.

Today is also National Webmistress Day, hence the picture.  There are all sorts of other categories women are still fighting/hoping for equality in.  Equal pay is an especially big one.  Being acceptable as the leader (with men taking orders), either as a company president or of the United States is another one.  I know some female professional athletes, like golfers and basketball players, that would love to make the money their male counterparts make.  I have a lady friend that is an anesthesiologist and when she tells people what she does, they sometimes blurt out, “But you’re a woman!”  She tells me it gets really old.

My husband is a big sports enthusiast so I at least recognize some of the big names on his favorite teams.  I have been known to offer a comment in a mixed group and invaribly one guy will look at me as if to say, “How would you know, you’re a girl?”  It makes me chuckle. (I only do it when I’m sure I’m right if we are in public!)

Currently women are now proving they can do some of the mlitary jobs that were always given to just men.  I’m glad they have the physical capability, but I’m old fashioned on this one: I sure wouldn’t want one of them to be captured by the enemy and find out the hard way they indeed, are not equal.

There’s one area of expertise that only a woman can do best and that’s being a Mom.  I applaud any man that has to fill both roles of Dad and Mom and I admit Moms don’t always get it right, but we do the best we know how at the time we do it.  Moms feel things differently, so express them differently than Dads and that’s a good thing.  Maybe wehn it comes to keeping a household going, we ladies should be more adamant about the guys having equality when it comes to chores.