Grief Can Do That To You 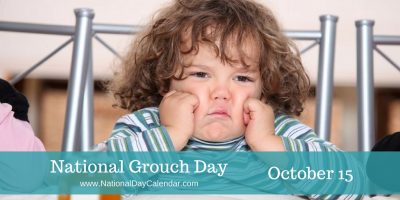 Today is National Grouch Day. Sesame Street has Oscar the Grouch and he is constantly complaining, about something; anything. He’s a glass-half-empty kind of fellow. The picture above shows a definitely unhappy child: maybe he’s hungry; he didn’t get to have a new toy; he doesn’t know when he’ll see his Mom again because she left in her military uniform; or his father is crying and he’s never seen him do that after talking on his cell.  The reason for the tears: he just found out his favorite uncle died.

Jerry had been sick for a long time. Sometimes you couldn’t even tell there was cancer in his system; other times, you didn’t think he would last another week. So when the end finally came, it was not a surprise. How much it hurts was a surprise. We all said it was a blessing he was no longer in pain. We added, he wasn’t here long enough to suit us.

I’ve been to far too many funerals already. I’ll share with you that both of my parents funerals were like a party week. The relatives came, the neighbors, the friends. People we hadn’t seen in a long time made contact with calls, cards, and flowers. It was festive. The pain set in afterwards when the house was quiet, and the company disappeared. Then the mind asks, “What just happened?”

Jerry’s funeral was like that. Cousins converged on Baltimore from Chicago, Boston, Knoxville, TN, Rochester, NY, and Miami. Friends came from next door, Washington, DC and Maine. We laughed about some memories and cried over others. We hugged each other; we said I love you. One of the family members didn’t speak to me and it really hurt my feelings. I thought he was mad at me, but then I found out he didn’t talk to hardly anyone. Grief can do that to you when you aren’t ready to face it yet.

I know this isn’t my usual type post, and there are lots of other reasons to be a grouch, but this reason is on my mind. The National Day of calendar suggests spending time with a grouch on this day and give them a reason to smile or pass them one of your own. It may help them be less of a grouch, and just maybe help them to heal from the pain of loss.