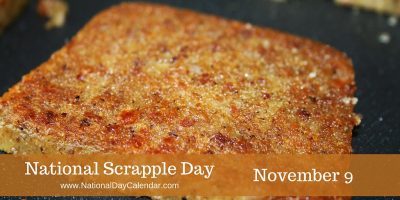 Scrapple is arguably the first pork food invented in America. For those who are not familiar with scrapple, which is also known by the Pennsylvania Dutch name “pon haus“, it is traditionally a mush of pork scraps and trimmings combined with cornmeal, wheat flour and spices.  (The spices may include, but are not limited to: sage, thyme, savory and black pepper.)  The mush is then formed into a semi-solid loaf, sliced and pan-fried

The immediate ancestor of scrapple was the Low German dish called panhas, which was adapted to make use of locally available ingredients and, in parts of Pennsylvania, it is still called Pannhaas, panhoss, ponhoss or pannhas.

I’m not personally acquainted with Scrapple so I included the above from the National Day of calendar.  When I mentioned it to my husband, he said, “I had it once in a restaurant near York, Pennsylvania,  and hope I never have to eat it again.” So much for the idea of making my own. I then looked up the contents of Spam; they are very similar except potato starch is used to hold things together instead of cornmeal. Maybe I will give one of the many recipes I found for scrapple a try and not call it that! It seems like it would be a good side dish for that weekend breakfast when no one wants to get dressed and there’s been too much bacon consumed recently. Seems anything covered with maple syrup as they suggest would be good!

Let me know how yours turns out!

8 thoughts on “Scrapple? What’s That?”