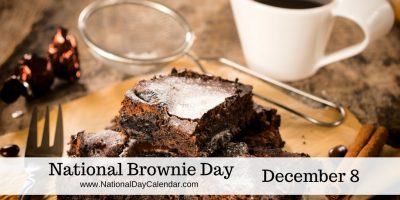 Brownies were created when there was a request for a desert for a group of ladies that would be attending a fair in the late 1800s.  They wanted a small cake-like dessert that could be eaten from a boxed lunch.  A Chicago chef, working at the Palmer House Hotel, created the first brownie for the ladies, which featured an apricot glaze and walnuts.  The Palmer House Hotel still serves their original recipe for brownies on their menu.

Which are your favorite brownies: blondies, with no chocolate or the normal chocolate? When I was a kid, my older sister started making congo squares. They were blond brownies with both chocolate and butterscotch chips in them, plus walnuts. A pan of these could disappear in a couple of days when all four of us girls were still home. They were best when still warm and the chips gooey.

Brownies are one desert I buy a package mix for. Betty Crocker makes them just as good as any recipe I have ever tried and with no mess. Currently, they are one of the go-to gluten-free deserts that taste so close to regular you can’t tell the difference.

I think brownies became really popular among college students in the ’60’s when they were laced with a certain weed.  I can honestly say I have never had one of those kind. I don’t think I missed anything. I’ve also heard of adding ex-lax to them when angry at a particular person. Thankfully I’ve never had the honor of eating any of them either. I guess I’ve been lucky.

In the baking aisle of any complete grocery store you can get a good brownie mix and multiple flavors of chips. If you add chocolate mint chips they would fit right in with the rest of your holiday treats.

One thought on “Brownies To Go”