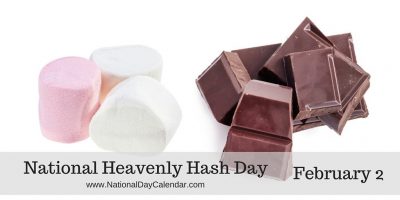 It’s National Heavenly Hash Day. In my neck of the world that means chocolate ice cream with chocolate bits and marshmallow swirl in it. According to the National Day of Calendar there are many other recipes from different ice cream makers, including one that is fruity. I’ll stick with the chocolate, thank you.

My husband works in big construction. Not outside on the projects as they are being built, but in the office, figuring out how much it is going to cost to build something, or renovate. He’s called an estimator. Today in western New York it is 20 degrees. I know, it isn’t zero, but it’s cold compared to being inside, and he has to go inspect an old building to decide if it is worth renovating. Bottom line, he’s going to be outside most of the morning. He left the house in heavy boots, warm clothes and his winter coat instead of dress shirt and tie.

What does this have to do with Heavenly Hash? Well, we aren’t 40 anymore, and when my husband gets cold, he doesn’t warm up as fast as he used to. I carried wood in yesterday and told him I would have a roaring fire in the fireplace and the family room up to 80 degrees when he got home. (When we bought our house, the neighbor informed us, our family room was the easiest room on the street to heat with its fireplace. That was learned during an ice storm in 1991 when there was no power for a few days and the neighbors congregated in our big room to play cards, share food, stay warm, and wait for the power to come back on.)

So, who wants ice cream on a 20 degree day. Well, if I’m true to my word, and the fire is raging, a bowl of Heavenly Hash might just be the right thing to have for dessert tonight. Maybe I’ll add some peanuts on his. He likes that.