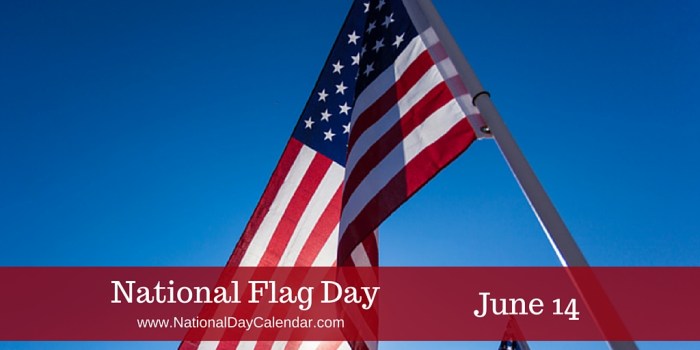 On May 30, 1916, President Woodrow Wilson issued a proclamation deeming June 14 as Flag Day.  President Wilson stated, “It is the anniversary of the day upon which the flag of the United States was adopted by the Congress as the emblem of the Union.” He also wrote, “On that day rededicate ourselves to the nation, ‘one and inseparable’ from which every thought that is not worthy of our fathers’ first vows in independence, liberty, and right shall be excluded and in which we shall stand with united hearts.”   [courtesy-National Day of Calendar]

I was going to add, nothing more needs to be said, but then I remembered a couple of times in my life that just seeing our flag brought tears to my eyes. One occasion was when I pulled into a funeral home parking lot to pay respects to a very dear friend. The Patriot Guard was standing at attention in two lines I had to pass through to enter the building. I almost couldn’t do it. One has to have an understanding of being a veteran, have a high degree of patriotism, and respect for the men behind the grizzled faces to grasp the emotion that sight filled me with.

The other memory had to do with when I attended Rolling Thunder in Washington D.C. It is held on Memorial Day weekend. 500,000 motorcycles, lots of American Flags, more veterans and a feeling of reverence and peace. Yes, motorcycles and reverence go together in this situation. I recommend it to anyone to experience at least once.

I hope you will fly the flag of this great country today and forget it has a few problems.