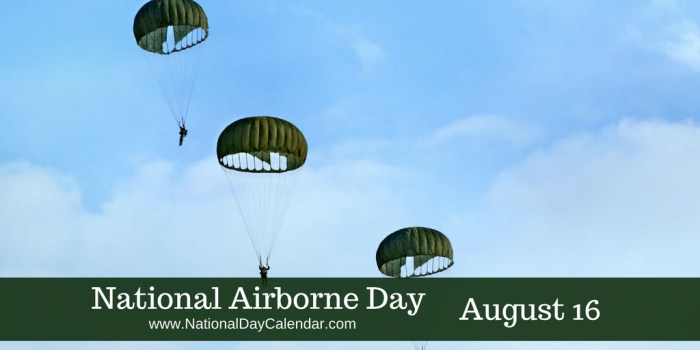 August 16, 1940, marks the date of the first official Army parachute jump at Ft. Benning, Georgia. The successful jump validated the innovative concept of inserting United States ground combat forces behind a battle line by parachute. These sky soldiers represent some of the most prestigious and effectively trained forces in the United States Army. (courtesy of National Day of calendar)

Each morning when I sit to write, I see what comments I have from the day before. This morning “someone” left a comment on last years post for this day in which I talked about pilots. “Someone” was absolutely correct that this day is about the ground combat forces, not pilots. I do apologize. In my defense, last years picture showed fighter planes that do not carry troops. I’m glad to get it right this year.

I have some very close friends that were ground combat forces, in Viet Nam, in Afghanistan, Bosnia, the Persian Gulf and as far back as WWII (though Kurt went into battle from a ship, he was still part of a ground combat force). I admire these people for fighting where ever the U. S. sent them. They carry the memories of war that are hard to deal with. The sights, sounds, and smells of combat don’t go away when a fighter leaves the involved area. We now call the resulting effects from the trauma PTSD. I’m sure you know the term and perhaps someone who deals with it daily.

It saddens me greatly to be sitting here feeling unsafe to express any opinion about our current government and to be so unsure of where the U.S. is headed as a country. Regardless of what decisions will be made, by whom, our military forces stand ready to fight for us. I applaud them. Though I can only name a handful personally, I know the mentality of the “brothers” and “sisters” too. They will follow the orders given for our defense. Suffice it to say, “Thank a paratrooper”.