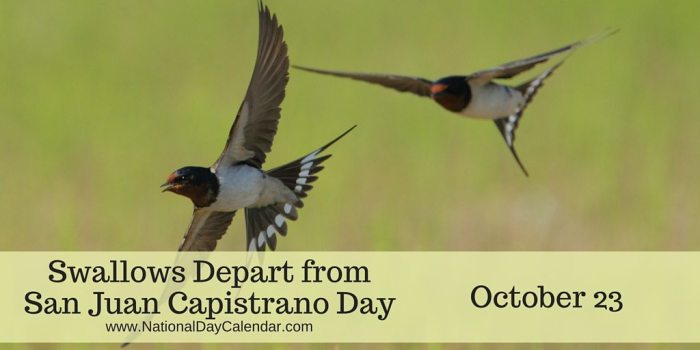 Cliff swallows are cousins of barn swallows and purple martins. They have long, narrow wings, forked tails, and weak, tiny feet. Incredibly graceful in flight, they feed on the wing, catching insects in their wide mouths; they can effortlessly make abrupt changes in direction or speed as they feed. There is a large population that arrives in San Juan Capistrano, California (about an hour south of Los Angeles) in March and departs in October. They winter in Goya, Corrientes, Argentina. [courtesy National Day of Calendar]

I have never seen the arrival or departure of the cliff swallows, but after reading about it is now on my bucket list. It’s a marvel the birds travel 6000 miles back and forth. That’s a lot of flying. The fact they do it on almost the exact day each fall and spring is even more fascinating.

Here in my corner of the states, we watch for and hear the geese overhead as they migrate through in the spring and fall. We have a large population of Canadian Geese that have decided this part of New York is a good place to stay all year. I think they are pretty, but they like to hang around the malls and one has to watch where you walk to avoid their little piles. On small lakes, just because of their numbers, they can cause quite the pollution problem. We also have black crows that stay here in the summer and leave in the fall. They are very noisy, big and can be intimidating to our cat. I can hear them calling to each other as I write.

I have always liked to watch swallows. They are so graceful, swooping up and down to get a bug to eat. When I was little our barn swallows would dive-bomb our cat when he would lay in the sunny driveway. He would twitch his tail and refuse to move even though the birds were quite persistent. Eventually he would get up and saunter away taking my entertainment with him.

I think seeing a mass of small, elegant cliff swallows flying would be quite a beautiful. Maybe there are some you-tube videos of the event. It wouldn’t be as good as seeing it in person, but would give me a taste of nature in action.

I am a retired grandmother that grew up in western New York state, left for 25 years and am now back in the area. I happily live with my husband and two cats. I am pro -military, food, family, and quilting. I am con-exercise, insulting commercials, and lack of common sense. My hope is to have the pile of paper on my desk become a book store novel that will make you laugh, cry, and perhaps, inspire you to make some changes in how you think.