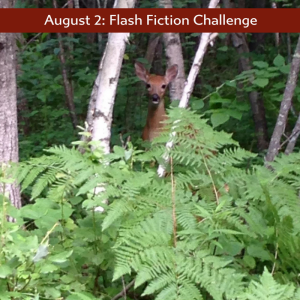 “My Dad told me the new people in the fenced mansion belong to the Mob,” Rock said.

“I heard it was some rich old guy with a sexy young wife,” Dude answered.

Crazy, always needing excitement, suggested, “Let’s sneak through the woods to see what we can see by their pool.”

A body guard turned their direction saying loudly, “I can feel eyes on us.” He reached behind his back bringing a gun forward and fired a shot above their heads. “Next time I won’t miss!”

In response to Charli Mills August 9, 2018, prompt from Carrot Ranch Literary: In 99 words (no more, no less) write a story that includes  an act of “peering from the woods.” Go where the prompt leads.