We had a very quiet night, no outside noises, no noise inside except for some joint snoring. It was very restful.

We left Pontiac at 8:45 am. Again, using the EZ66 Guide we headed for Atlanta, IL, in search of Palms Grill Café. In the last five years it has been completely redone in the 1940’s era. It’s a good thing we didn’t arrive any earlier because it only opened at 10 am. Sarah, our server, was dressed in a retro outfit. She made a pot of decaf for me without complaint. I took lots of pictures so will tell the rest of the story in their captions.

Palm’s Grill Cafe decor and old cash register. There is a zumba class ad under the register that made me chuckle. (So not a 40’s era thing.)

Sarah behind the counter trying to “talk” to a non English speaking couple from France. My pork chop and eggs was yummy. Notice the mini-creamer. Just the right amount. 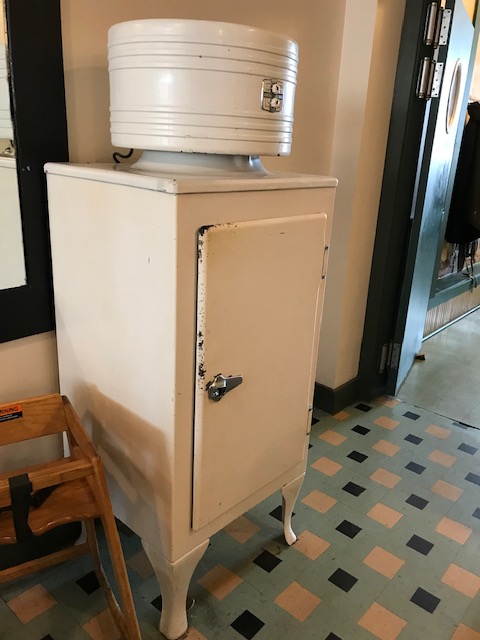 Upstairs in the same building is a museum that featured the town history and how Abe Lincoln impacted it and its inhabitants. There is a cast of Lincoln’s face and hands made by a local artist for a statue that was so accurate it was used for many more statues. On display is also a scabbard and sword owned by a Mr. Kenyon that he used in the civil war and wore while escorting Lincoln’s casket after the assassination. On display is a statue entitled the Council of War. It was made by John Rodgers in 1866. Bob and I were amazed at the detail and the fact it had been made so long ago out of plaster and clay. We speculated as to it’s worth, but I have yet to research that. 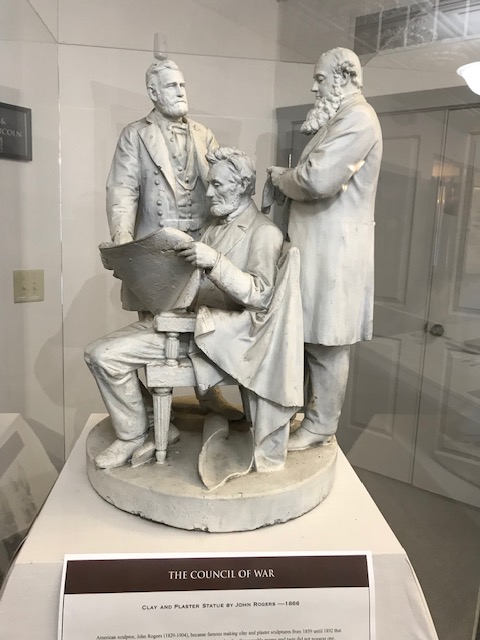 There are a number of giant statues along Rt. 66. One is across from the café.

Paul Bunyan and a giant hot dog. He didn’t drop it on our car.

Next to the café is an arcade game museum. We walked through it and remembered playing Pac man and pinball in pool halls or bars when we were young. They cost money and kept a young person occupied away from home for hours. And today we complain about our young people, and any other age too, playing games on their phone or computer for hours. At least they are home. One of the machines was so old it had no flippers. You just sent the ball flying and were entertained by the lights it happened to make blink on its way back to the starting point.

Kitty corner from the café is the octagonal library building, with a clock tower on the corner. The clock had been moved there when the local high school was torn down after a new one was built. In the Arcade we met Bill, one of eight men that take turns winding the clock. It needs to be wound, by hand crank, at least every eight days, but the men have learned it takes 80 turns of the crank if they let it go that long, so they do it every few days. It chimes on the hour and the mechanism for that has to be wound separately. Bill took us to the clock and opened the door so we could see everything he explained to us. Fascinating. As we walked over, he said hello to two other men that drove by. It’s a perk of living in a small town, knowing your neighbors as your friends. There was also a grain elevator display we passed on for the sake of time.

We got on Highway 55 to go south to Springfield, IL, to Lincoln’s tomb. So glad we made this one of our stops. When I first saw the tomb, I wondered how many years after his death was this beautiful tribute built. Turns out the family started it very soon after his death. It’s one of those buildings you must see in person to appreciate. Inside you walk in a circle through pink marble hallways to visit the actual gravestone. There are more than a couple of statues of Lincoln in the hallways each as impressive as the next. The flags surrounding the gravestone represent states his ancestors are from and the states he lived in. There is also a presidential flag. I didn’t know such a thing existed.

The EZ66 Guide said Henry’s Rabbit Ranch and Rt. 66 Emporium in Staunton, IL. was worth a stop. We needed gas and I love critters, so that’s where we headed. I’m not quite sure how this stop made the guide. There were three live rabbits in an outdoor cage, Gilbert, a large orange rabbit that liked to have his ears rubbed inside and an owner that would still be talking if we hadn’t been on a time limit. One thing about these shop owners and volunteers in the museums, they like to talk and they like people. It’s very easy to make a quick stop last an hour.

We left there and drove 66 to Hamel, where we had our usual lunch; ice cream at The 66 Creamery. Normally we eat a late breakfast, dairy for lunch and a nice supper. Works for us. Besides, it’s a road trip, calories don’t count.

Because we were short on time, we got back on Highway 55. Bob drove through downtown St. Louis during rush hour traffic so I could see the Arch up close. It’s so big, and it’s just there. Quite impressive. My attempt to get a decent picture was unsuccessful.

We arrived at Larry and Lisa’s at 6:30 pm. Only a half hour late. Larry is Bob’s step-son who is married to Lisa. Lisa told us Bob was in Rolla, MO, 19 years ago last week for her and Larry’s wedding. Time does fly. We were given a tour of the house and their beautiful plant filled yard and greeted their two dogs, Penny and Maggie, before we went off to Dickey’s Barbecue Pit for supper. It was good, but I was more interested in the company and conversation to tell you much about it. I did have some fried okra which is a treat in my opinion. I’m sure many won’t agree.