We got up when all the people walking past our door and slamming car doors woke us. Some hotels are just better than others. Last nights was the old model with all the doors outside and a parking lot between two buildings so every noise reverberated off the walls. Oh well, it was time to get up anyway. We had a small breakfast that came free with our nights stay.

We backtracked on Rt.40 to visit the Painted Desert and Petrified Forest National Park. It was worth every penny of the $20.00 fee. One scenery picture is as good as or different in some way to the one before. Even the little kids were going, “Wow,” when they saw the sights over the railings. 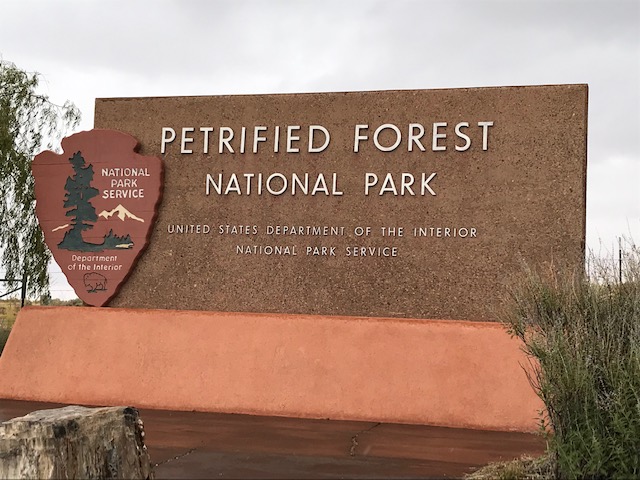 Painted desert. Needs no other explanation except the pictures don’t do it justice. It was cloudy and misty the whole time we were there. Some sunshine would have made everything more vibrant. 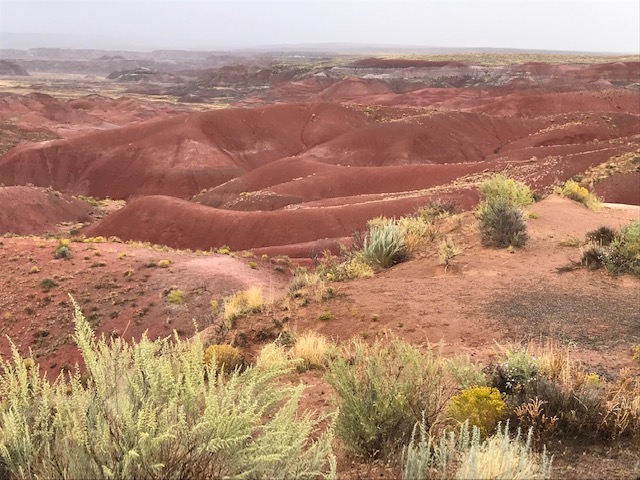 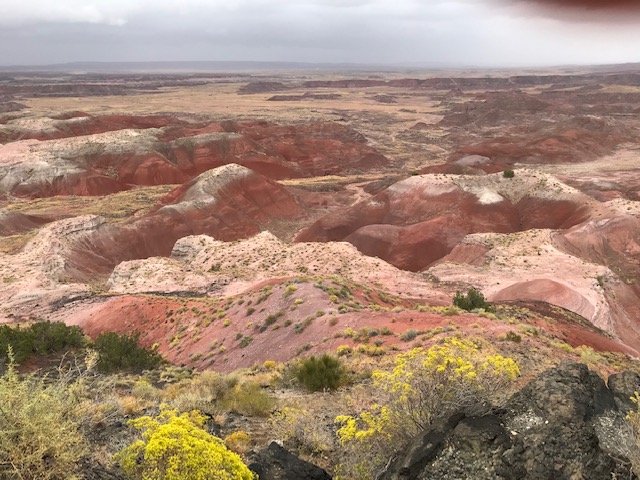 And another. Sorry my finger likes to get in the shots. 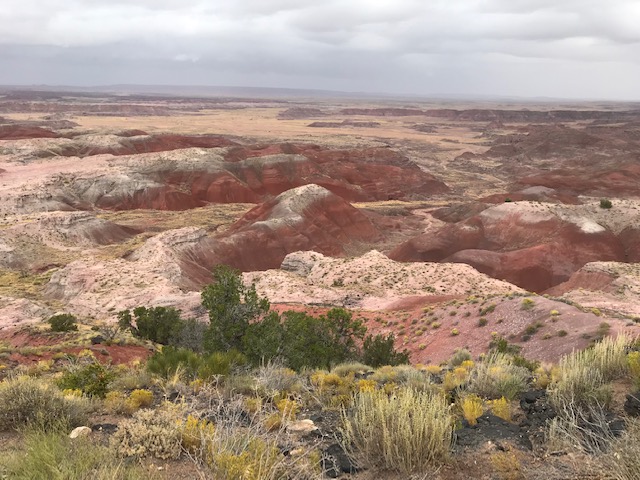 Below was taken straight down over a railing. The shiny copper color at the bottom center is a petrified tree. You must see these views for yourself to appreciate them.

The blackness comes from volcanic rock and basalt.

So much of 66 in this area is buried under Rt. 40, not driveable anymore, or inaccessible on Native American lands, but going through Winslow, Arizona, the route is alive and well for a few miles. We guess it is probably the most famous corner of the whole route because of the Eagles song, Take It Easy, which mentions standing on the corner. Some guys that had just arrived on their Harley’s took this picture for us. Everyone was very friendly and having a good time. The eagle on the window sill and the couple seen above us are paintings. Really good ones. 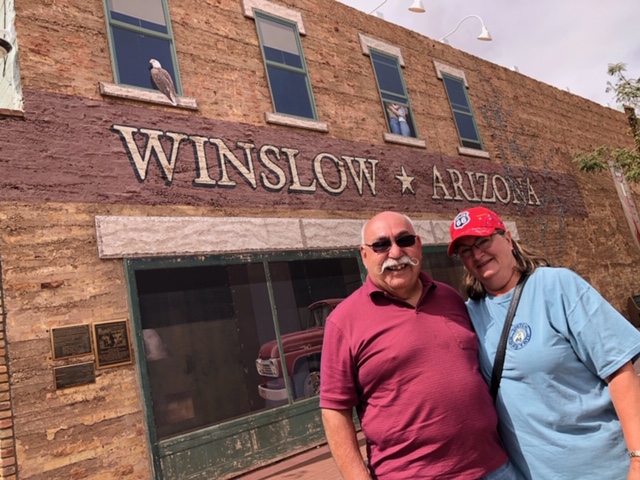 Below is Glen Fry, one of the musicians in the Eagles band.

A brewery down the street was serving lunch to football fans, beer fans, and travelers. Bob and I both ordered a salad.

The server brought us our beers and said the glasses looked different but were both 16 oz. We told her we would share a water so she brought a large mug and two straws. It was just like being at the old fashioned soda fountain again. 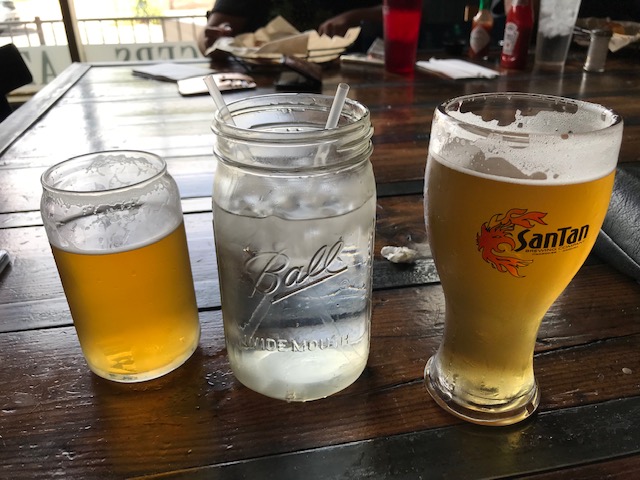 We got back on Rt. 40 and decided we didn’t need another gift shop or similar museum to what we had already seen, so headed to Flagstaff. Below is a mountain that loomed large on the horizon and the fields were still arid. There were signs to watch for Elk and deer, but we were lucky enough not to see any.

That mountain range is getting closer and now we have fur tree lined roadways.

The closer we got to the mountains, the less easy it became to get another picture. We did stop so Bob could put a coat on. We had the top down and the temp had fallen to 68 degrees. There’s a pretty good wind chill when you are going 75 mph. We hadn’t seen any real trees in three days.

Tonight we are sleeping in Williams, AZ, in the Grand Canyon Railway Hotel. The building is a huge and shaped like a baseball diamond with a nice courtyard in the middle. The ticket office and restaurant are in different buildings so we are getting our steps in. We bought a package so  had dinner in the buffet room. I had penne pasta with pesto sauce and shrimp and a salad. Dessert was a apple pie ala mode.

Singing folk songs during our meal was Jason. We sat and listened until he finished for the evening. I got another spurt of country music. Live at that. You can tell how good he is by the over flowing tip basket, and a lot of those bills are fives.

The internet has been going off and on all evening. Tomorrow we are going into the park and will stay on the South Rim. I don’t know how the internet will work, so if I miss a day, check my regular Facebook page at Sue Carmichael Spitulnik for pictures.