Michael and Tessa gazed at the Wall of Fame in their high school. Tessa asked, “Did you see Phillip Sheppard when he was on the TV show Survivor?”

“I did, and his pink underpants didn’t surprise my Aunt Sue a bit. She said he was thee character in her class. I wonder how much ribbing his brother James took as the Rochester Police Chief at the time. He probably felt like he was wading in deep water.”

“And Bill T. Jones was her student instructor in choir. Who knew at the time these three African-American students would become famous.” 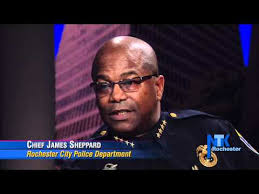 Cheif James Sheppard when in office

Note: I ate lunch with Bill T. Jones and other friends every day when I was in eighth grade at Wayland-Cohocton Central School. He is now a world-renowned modern dance choreographer and Kennedy Center Honors recipient. James and Phillip Sheppard were younger than me. I had the opportunity to have lunch with Phillip after his second appearance on Survivor. What a fun guy to hang out with.  And no, we had no clue while in high school these classmates would become household names.

Written in response to Charli Mills June 11, 2020, prompt at Carrot Ranch Literary: In 99 words (no more, no less), write a story deep waters. It can be literal or metaphorical. Think of a place and person and situation. Explore. Bathe. Renew. Go where the prompt leads!

99 words based on truth