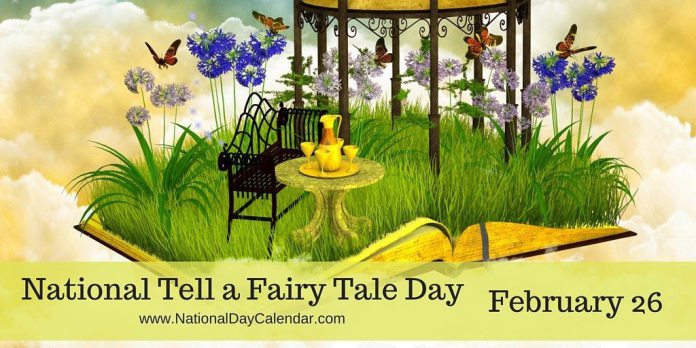 The following information is provided on the National Day of Calendar. Most of it was new to me so I am sharing it with you. Enjoy.

What were once oral histories, myths and legends retold around the fire or by traveling storytellers, have been written down and become known the world over as fairy tales.

The origins of most fairy tales were unseemly and would not be approved or rated as appropriate for children by the Association of Fairy Tales by today’s standards. Most were told as a way to make children behave, teach a lesson or to pass the time much like ghost stories around a campfire today.

Many of the stories have some basis in truth. For example, some believe the story of Snow White and the Seven Dwarfs is inspired by the real life of Margarete von Waldeck, the daughter of the 16th century Count of Waldeck. The area of Germany where the family lived was known for mining. Some of the tunnels were so tight they had to use children – or small people such as dwarfs – to work the mines.

Margarete’s beauty is well documented, and she had a stepmother who sent her away. She fell in love with a prince but mysteriously died before she could have her happily ever after.

As the stories evolved, they took on a more magical quality with fictional characters such as fairies, giants, mermaids and gnomes, and sometimes gruesome story plots.

Toes cut off to fit into a slipper, a wooden boy killing his cricket or instead of kissing that frog prince his head must be cut off, but those are the unrated versions.

The brothers Grimm collected and published some of the more well-known tales we are familiar with today. Jakob and his brother Wilhelm together set out on a quest to preserve these tales at a time in history when a tradition of oral storytelling was fading. In 1812, they published their first volume of stories titled Household Tales.  Their stories had a darker quality and were clearly meant for an adult audience.

Rumpelstiltskin is one of the tales they collected. There were several versions, and the little man went by many names in different parts of Europe. From Trit-a-trot in Ireland to Whuppity Stoorie in Scotland, Rumplestiltskin was one difficult man to identify.

Interestingly, Professor Rumplestiltskin Schwartz has been known to debate the origins of some Mother Goose stories, including the fabled Three Little Pigs. The tale is full of Jewish allegory and symbolism. Based on this and much more, Schwartz would place the origins of these particular set of piggies in 14th century Gdansk. Read more here: https://www.ou.org/jewish_action/02/2013/the-three-little-pigs-a-quintessential-jewish-allegory-in-deceptive-disguise/

While some storytellers have a long and sometimes ancient history such as Aesop (The Fox and the Goose, The Ant and the Grasshopper), other storytellers are more recent like the Grimm brothers.

Hans Christian Andersen first published in 1829 and brought to us written versions of the Princess and the Pea, The Ugly Duckling, The Little Mermaid and many more. Where Grimm’s tales could take on a darker cast and were unmistakably written with adults in mind, Andersen’s stories are sweet and warm.