I started the day with a cold-pond temperature shower in the Days Inn in Lakewood, Ohio. I have to say the bed was wonderful, the halls were quiet, but the room cleanliness and repair were the worst ever in our travels. I’ve never felt uncomfortable walking barefooted in a hotel room before. When I called the front desk about the water temperature, they said let it run longer. By the end of Bob’s shower, the water was lukewarm. The refrigerator and air conditioner are both very quiet. A big plus for me. I won’t bother with the details about the condition of the room. Believe me when I say we won’t be staying here again even though it is only five minutes from the kids. I would also advise others to avoid the place. We thought about raising a ruckus and checking out, but didn’t want the hassle of moving. We left the do not disturb sign in the door all day and came back to the room the way we left it.

We had coffee and a pastry at the Blackbird Baking Company for breakfast. The pastries were so good we bought two to have in the morning before we get on the road.

When we finished, we went to the kids where I was reprimanded (in a loving way) for not telling you yesterday that I made the fabric passage picture that was behind Jon’s Emmy. I must be getting old. I remember Jon coming to the house one day while he was working at 13WHAM and asking for help making the gift for his then fiancé, Dung Tran. She is Vietnamese by birth, but a US citizen since her teen years. Her name is pronounced like the word young. I don’t remember tracing, cutting and then stitching all the letters onto the grey back ground but both Jon and Dung said I did. I wouldn’t mind being reminded of doing more nice things like that.

We met Dung about the same time we met Jon when they were boyfriend and girlfriend. We have enjoyed our part in their long-distance relationship, then marriage, when Jon worked in Rochester and Dung taught school outside of San Francisco. When Jon left Channel 13 for a job in Bakersfield, CA, they finally got to live together and start their family. Then he was offered the job in Cleveland a year and a half ago, so here we are.

While Dung was still in the Bay Area, she got more education and received a national teaching certificate so she could get a teaching job anyplace in the US without having to be certified in the individual state. She has just been hired full time to teach kindergarten in Cleveland. I understand not a lot of teachers go the trouble of getting the certification. It’s a lot of work, and not very easy to accomplish. We are proud of our “bonus kids” just like we are of our own for their accomplishments.

There was an air show along the Lake Erie waterfront today. I can’t guess at the number of people that filled the parks, streets, condo balconies and restaurant patios. We were among them. We came into downtown Cleveland about 11:15 to get a good parking place in one of the garages then walked into city center for lunch at the Winking Lizard. I had green siracha coated chicken wings that were cooked perfectly. Bob had a burger whose “bun” was a filled quesadilla. On top was a bacon wrapped fire roasted jalapeno pepper with cream cheese inside. He said it was very good. I helped him eat his fries and shared some with the sparrows that lined the next table waiting for a handout.

I don’t know if you know any TV personalities personally like I do so I will tell what it is like to be seen with them in public. If you are any kind of sports fan you know about the Cleveland Cavaliers (pro basketball), The Cleveland Indians (pro baseball), and Cleveland Browns (pro football). This year the Browns are expected to be very good. Walking with the local sportscaster in crowds is an experience. At one traffic light a man driving a van honked and waved, then yelled out the window, “Channel 5 Weather?” Jon responded with a big smile and wave, “Sports!” The next guy a few streets later got the job description right with a shared grin. Another hundred people and a guy said, “Jon Doss!” and kept walking. He was recognized again and I was able to say to that man, “Seeing this as a parent makes me proud.” Jon and Dung call us their Rochester parents. Jon said someone calling him by name is not very common. It was entertaining to watch people try to figure out where they knew him from without being intrusive. And lots of people were looking at Bob’s handlebar mustache too. I blend into the crowd which is fine with me. We left the air show about 2:00 to take Theo home for his nap. Bob and I took one too. The weather couldn’t have been any better; sunny and in the mid 70’s.

About 5:15 pm we went to Crocker Park, a shopping area like none I have ever seen, west of Cleveland. It’s not a mall per say, but a retail village that spreads four blocks by two blocks with 123 restaurants and stores that have deluxe condos on the higher floors. It is not uncommon to see Porches, Maseratis, Bentleys and other exotic vehicles parked along the streets. Jon says the professional sports players hang out at one particular steak house and some live in the condos. There are expensive, comfy lounge chairs on the sidewalks and beautiful planters full of colorful flowers. The chairs were occupied by people drinking Starbucks. I think I need to bring my daughter and grandson next time we visit. Molly would love the shopping and William could check out the cars and tell me all about them.

We ate supper at Alladin’s, which is much like the one in Rochester. For you out-of-towners it is a middle eastern restaurant. I’ve never had such good humus and my lamb was yummy too. I forgot to take a picture. Afterwards, we went for ice cream at Graeter’s. I am a sucker for good home-made ice cream. Mitchell’s has the corner on ice cream in Cleveland, but I liked what I had tonight. By the time we got back to the Doss’s we all had in over eleven thousand steps. That includes 2 ½ year old Theo. He eats well, loves to run and sleeps better than any of us.

Back home, Jon and I shared a nightcap then we said our goodbyes. Theo will not be happy when he gets up in the morning and Grandpa Bob and Grandma Sue don’t show up. Maybe we should do face time with the little guy more often.

We started our day at our favorite restaurant having a great breakfast and saying “see you in a month,” to our favorite waitstaff. Thank you, Steve’s Original Diner for being our home away from home.

Just in case you don’t know about RT 66. It’s starting place is in Chicago, and Rochester, NY, is a few miles from there. So, we have to do some driving to get there. Today our destination was Cleveland, Ohio. When you are both senior citizens and you know you have a few hours in the car, you can easily revert to being a child. We wondered if on this trip we would see all 50 states license plates. What a surprise. Before leaving New York state we saw 21 different states, counting our own. Then the highlight of the day, in Pennsylvania, we saw an Alaska plate. We had expected that and Hawaii to be on the endangered list. By the time we got to Cleveland we had seen 28 different plates. This game might not last as long as we thought especially since we still have nine more states to travel through before the end of the month.

We left home at 11:18 am with an odometer reading of 60,976 miles. We paid $2.74 a gallon for gas to fill the tank. We each have a suit case and computer case, one six-pack size cooler, and an extra bag for footwear and swim wear. We used to do nine-day trips on a motorcycle and I don’t carry any make-up, plus we will be staying in Best Western’s that have a laundry room, so we feel we have adequate clothing. Oh, there are two red coats in the miniscule trunk that match the car, in case we need them. I do travel with my own pillow.

We used WAZE for driving directions instead of Google Maps, but when comparing them they seemed very similar. WAZE does warn you about police in your locale, though we didn’t see them. We had the top down for a few miles, but rain forced us to stop and put it up. Had we been on a motorcycle we would have been wet till we got to our destination. There is a lining to that cloud of aging when back and knee issues make you give up a favorite toy for another type.

You are probably wondering why we only went as far as Cleveland. That’s where our “bonus son” and his family live so the stop was a no-brainer. What’s a bonus son you ask. A child you claim as your own, but you didn’t have to raise. He’s been a part of our life for 13 years. He’s now a sportscaster for WEWS Ch. 5, Cleveland, Ohio. His wonderful wife made us dinner and their two-year-old, Theo, kept us entertained until Daddy got home from work. Then we spent a couple more hours catching up on family news. Part of that conversation was about the Emmy Jon won for Hosting and Producing the Cleveland Browns football pregame show. Little side story, a few years back a friend of Bob’s asked Jon why he thought he could make a living doing sports news on television. Jon’s answer then was, “Because I’m good at it.” Now at the age of 31 he has his first Emmy. The kid knew his calling and followed it. We are proud of him. Tomorrow I’ll tell you more about his wife. 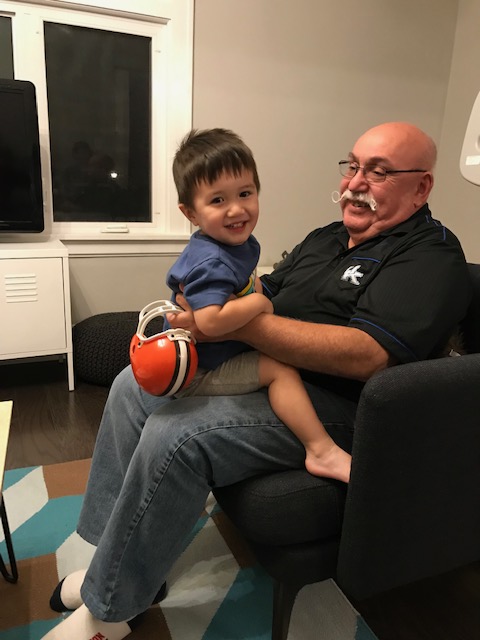 Jon’s Emmy in front of a saying he gave his wife when they were living and working on opposite coasts.