Kera straddled Brent on the park bench. “I love you and getting engaged has made me very happy, but doing this without protection is a bit scary.”

“We’ve been talking about kids and when I told Mom about the ring she said Michael was looking forward to her having grandchildren. They just might get one sooner than any of us thought.”

“My Mom would only be upset about not getting to plan the perfect wedding.”

“A perfect wedding would be our families and friends in this park.”

“I’d prefer a church but this would be fine if we must.”

Written in response to Charlie Mills January 23, 2019, prompt from Carrot Ranch Literary: In 99 words (no more, no less), write a story about a park bench. Use this gif to choose a timeframe and write the story behind that particular scene. Use the time as your title. Go where the prompt leads!

It Takes a Warrior

The nurse woke Maggie the morning after her right breast was removed. “Your husband wanted me to make sure you saw this.” She held up a framed picture of them holding compound bows. The inscription on the glass read, “To my warrior. Now you have an advantage. Your chief loves you.”

Even though it hurt, Maggie laughed. “We are professional archers. I have complained my boob gets in the way, now it won’t. That’s why we decided I shouldn’t have reconstruction. He tells me it will take a warrior to beat cancer and get strong enough to compete again.”

In response to Charli Mills May 31, 2018, prompt from Carrot Ranch Literary: In 99 words (no more, no less) write a story about warrior women. It can be myth or everyday mothers and wives. Go where the prompt leads.

How Did You Meet?

My husband and I recently went to a dinner hosted by his company. During dessert time, the company owner went around the table and asked each couple how they met. He came right out and told us, if his employees know each other better they become more invested and caring so working together improves. The owner is a very smart man who my husband admires and respects highly. The company is a pleasure to work for. END_OF_DOCUMENT_TOKEN_TO_BE_REPLACED

Not So Long Ago 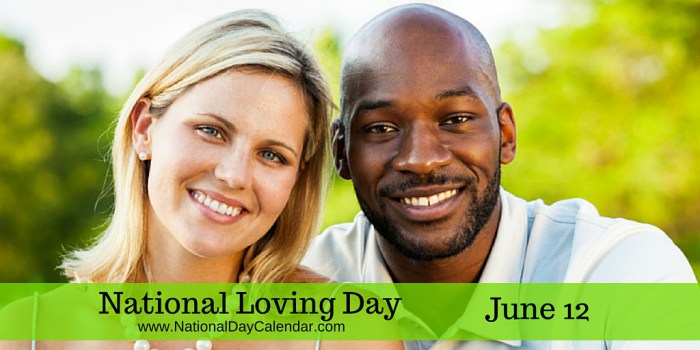 It’s National Loving Day. The title of this day has two meanings. It is about love, and about a couple with the last name of Loving. It is an annual celebration that commemorates the anniversary of the 1967 United States Supreme Court decision Loving vs. Virginia.  That decision struck down all anti-miscegenation laws, that banned inter-racial marriage, remaining in sixteen U.S. states citing “There can be no doubt that restricting the freedom to marry solely because of racial classifications violates the central meaning of the equal protection clause.”

I had no idea that inter-racial marriage had ever been illegal. I guess I’m not as well versed as I thought. And 1967 wasn’t so long ago, actually during my life-time. I don’t know why they didn’t use a picture of the actual couple that fought the fight. I will show you who they were.

As a young Air Force wife in the early 1970’s, knowing bi-racial couples was common especially when we lived in England. We didn’t think any thing of it. Maybe it was because we were young and the decade of free-love had just happened. I’m not sure the actual reason, but I am sure we thought they were brave and maybe a little “far-out” as the term went back then.

I also remember there being more parental disapproval for dating an opposing religion. My mother taught us that people were people. You liked them because of their merits, and avoided them for the same. Color was not an issue in my house. I’m glad of that thought process, though it did leave me at a disadvantage when it came to understanding why other parents didn’t think the same way. I realize now, my Mom was “hip”.

On a recent trip to The French Quarter in New Orleans, one of the main things I noticed was people were people. There was no apparent concern what race, sexual gender or back-ground anyone was. They were just people. It was a very freeing feeling, one I wished had carried back to western New York state where I live.

As you go about your day give some thought to love; what it means, why you love the people you do, and how you demonstrate it to others. Then add in all the people of different ethnicity who you know and be thankful for Richard and Mildred Loving, that we can choose to love who we want without ever thinking about whether it is legal or not.

Chocolate lovers rejoice as February 14th is National Cream-Filled Chocolates Day!  On a day when heart-shaped boxes are filled with bite-sized chocolates with ooey, gooey centers, quite a few of these cream-filled goodies will be exchanged and shared on this Valentine’s Day.  Enjoy!

Here’s a new one; the date on the above picture is incorrect, so sharing the information with you was interesting. Just goes to show, even a National Calendar web-site can have errors. Next time you find yourself making one, know you are in good company. If you don’t have a special someone in your life, call your Mom, or sister, or Dad, or brother; share the day with a person in your life that has loved you from the beginning.
And don’t forget the chocolates.

It’s National Spouses Day! (Yes, I know I’m a day late!) Say THANK YOU to your spouse just for being who they are, how they make you feel, how they enhance your life, what they do for your family, how they pay, or help pay, the bills….the list could go on and on.

Personally, I think they should have used a picture of a couple that had been married over 50 years for this day. If you make a relationship work that long, then you can brag you’ve made it. I know I’m jaded, but a couple as young as the one above hasn’t had time to climb the mountains and ford the raging rivers that happen in a relationship. To me it appears they are still thinking love can conquer anything. It sure as hell helps, but it’s not always true. People grow and change, or not, and if you aren’t growing together, all too often you are growing apart.

Wow! This got heavy really quick. Sorry.  I think you can guess I have experienced both types of relationships. Back to the real reason for writing this a day late. My husband is a loving, supportive spouse. He gets that when I make comments about a bad meal in a restaurant, I’m not complaining, I’m just stating facts. If I were complaining, I would be whining too. He has encouraged me to grow, is excited for my changes, and has given me the support needed so I could quit work and write a really long novel that may never get published. He’s a gem, or as they say today, a keeper. He has helped my children on multiple occasions and I can proudly say, they talk to him before they talk to their own father. I am truly blessed.

My husband and I became spouses when we were both over fifty. Maybe that’s the key. We had become mature enough to not make crazy demands of each other and knew the reality of being friends was more important than lust. Anyway, we appreciate each other, try not to take each other for granted and still say ‘please and thank you’ on a regular basis. It feels good at the end of each day to be able to say, “I’ve got a great spouse whom I love!”

Grief Can Do That To You

Today is National Grouch Day. Sesame Street has Oscar the Grouch and he is constantly complaining, about something; anything. He’s a glass-half-empty kind of fellow. The picture above shows a definitely unhappy child: maybe he’s hungry; he didn’t get to have a new toy; he doesn’t know when he’ll see his Mom again because she left in her military uniform; or his father is crying and he’s never seen him do that after talking on his cell.  The reason for the tears: he just found out his favorite uncle died.

Jerry had been sick for a long time. Sometimes you couldn’t even tell there was cancer in his system; other times, you didn’t think he would last another week. So when the end finally came, it was not a surprise. How much it hurts was a surprise. We all said it was a blessing he was no longer in pain. We added, he wasn’t here long enough to suit us.

I’ve been to far too many funerals already. I’ll share with you that both of my parents funerals were like a party week. The relatives came, the neighbors, the friends. People we hadn’t seen in a long time made contact with calls, cards, and flowers. It was festive. The pain set in afterwards when the house was quiet, and the company disappeared. Then the mind asks, “What just happened?”

Jerry’s funeral was like that. Cousins converged on Baltimore from Chicago, Boston, Knoxville, TN, Rochester, NY, and Miami. Friends came from next door, Washington, DC and Maine. We laughed about some memories and cried over others. We hugged each other; we said I love you. One of the family members didn’t speak to me and it really hurt my feelings. I thought he was mad at me, but then I found out he didn’t talk to hardly anyone. Grief can do that to you when you aren’t ready to face it yet.

I know this isn’t my usual type post, and there are lots of other reasons to be a grouch, but this reason is on my mind. The National Day of calendar suggests spending time with a grouch on this day and give them a reason to smile or pass them one of your own. It may help them be less of a grouch, and just maybe help them to heal from the pain of loss.