Let me start with a moment of silence for the 9-11 victims; the ones who died, the ones who live but suffer from PTSD and all their families and loved ones. On this date, 5 years ago, I lost a dear friend. Bear with me while I remember Dack, Howard Ackerly Stapley. I am fortunate to be able to stay in touch with his wife and daughter.

Bob knowing how the late nights were getting to  me decided today we would stay on Rt. 40, doing 75ish miles an hour, only make our morning and lunch stop and get into Amarillo, Texas, in time for me to do laundry, start my blog, then go to supper and maybe find some country music. Read on to see if he accomplished his goal. 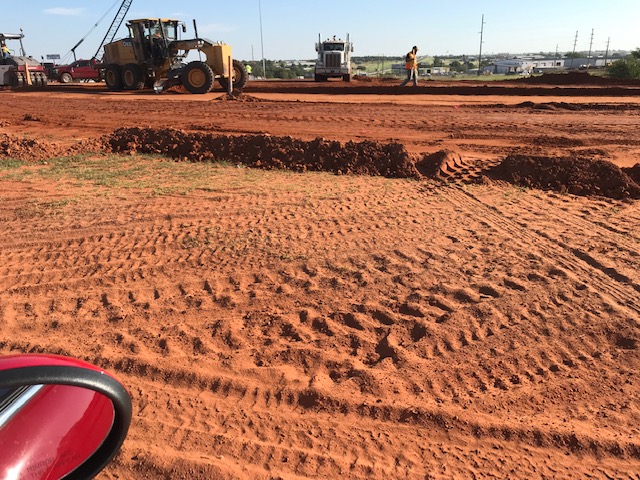 Red dirt in many places in Oklahoma. This was in Elk City on a new road project. 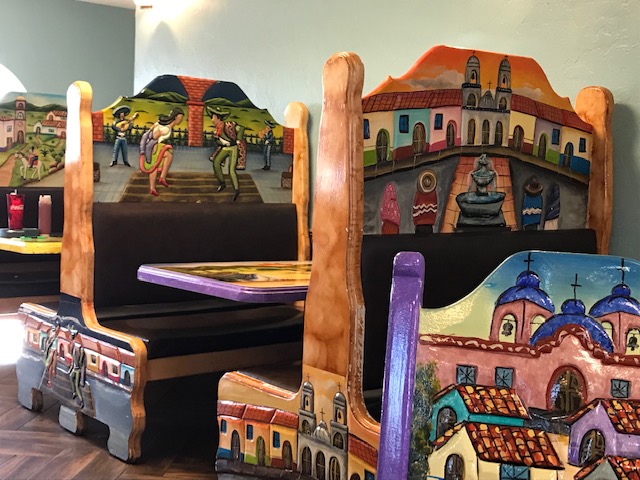 We had breakfast at Pedro’s. Above is their colorful, carved and painted booths. I love the colors and happy feeling. Below on the left is Bob’s Mexican skillet which he really enjoyed. Closer to you is my huevos rancheros. This is a favorite of mine and I haven’t had it the same way twice from restaurant to restaurant. You’ll see more examples. 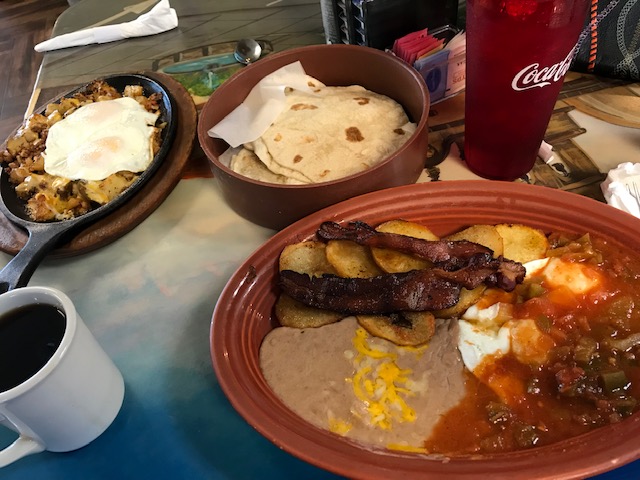 After breakfast we went to Elk City’s National Rt. 66 museum and Old Town Museum Complex. If you are from western New York state and have been to the Genesee Valley Country Museum, it was much like that. It had many examples of the old buildings, offices, and trades. Because we had seen Jesse James hideout in Missouri, the following wanted poster fascinated me. Do you know how much $25,000.00 was worth back then? I guess the railroad could afford it.

Below is a 1953 Lincoln Continental. You figure out why the date is important to me.

Below is an example of an exam table in a dispensary. Notice the overhead light. The instruments and set up seemed so archaic it gave me the willies. 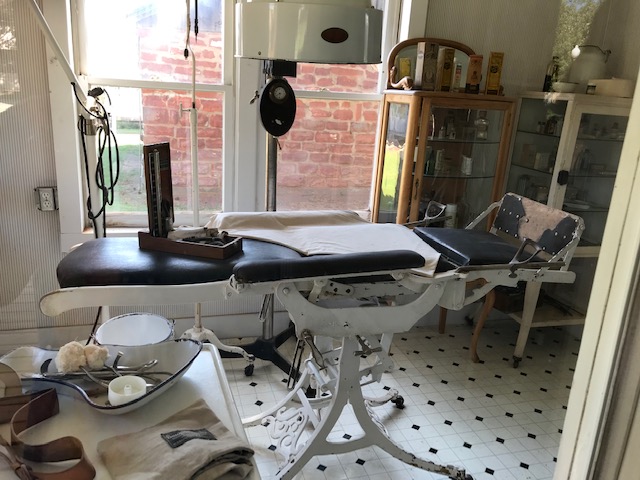 Below is an Elk City train depot replica. The elevation says 1920 feet. That is interesting because even though the terrain seemed so flat to us, my ears “popped” due to the elevation.

Above is an old fashioned windmill display and below a fence made out of wagon wheels, tractor seats, and tools. I love the creativity of the fence. I’ll bet one could pick up these old tools at antique shops and make a unique fence for your personal use. 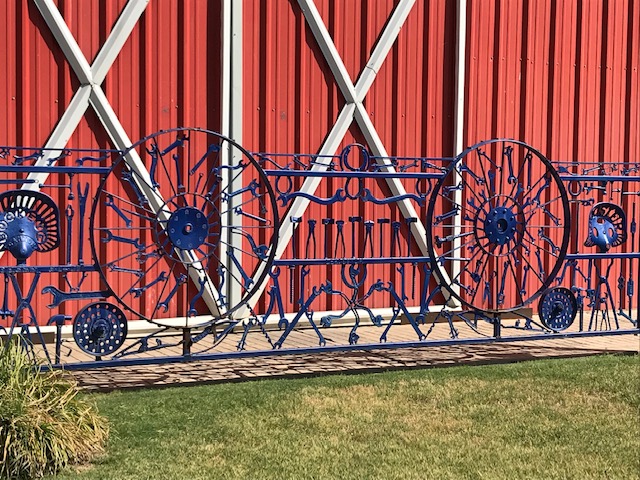 We are glad we didn’t miss this complex in Elk City. We wouldn’t have known how nice it was if we did, but we felt like the time spent there was well worth it.

We got back on Rt. 40 and traveled on to McLean, Texas, to the Devil’s Rope/Old Rt 66 Museum. Devil’s rope is barbed wire. I grew up in farm country, I know what barbed wire is, or thought I did. Yesterday in the cowboy museum we found out there were probably 100 different kinds of barbed wire. Today that information was solidified. The tools used to make it and then string it to make fences are almost as varied at the wire itself. What an education. I took the picture below to show once again, how popular Rt. 66 is with both Americans and non-Americans, besides, the Texas shaped plaque lets you know how far west we have traveled.

In the 40’s, 50’s, and 60’s, in the USA, Burma Shave was a popular men’s shaving cream. Below is an example of their unique advertising. In many locations, including where I grew up, one could read these signs, spaced every so many feet apart, as you traveled along a road, until you got the whole sentence. They all ended with “Burma Shave.”

Below is a photo of the only “Cottage Court” between Oklahoma City and Tucumcari, New Mexico in 1923. I imagine the tourists that could afford to make the trip in those days, in an automobile, were the affluent. Looking at all the memorabilia and then talking about the ease of life and traveling we can do today made us feel very privileged. 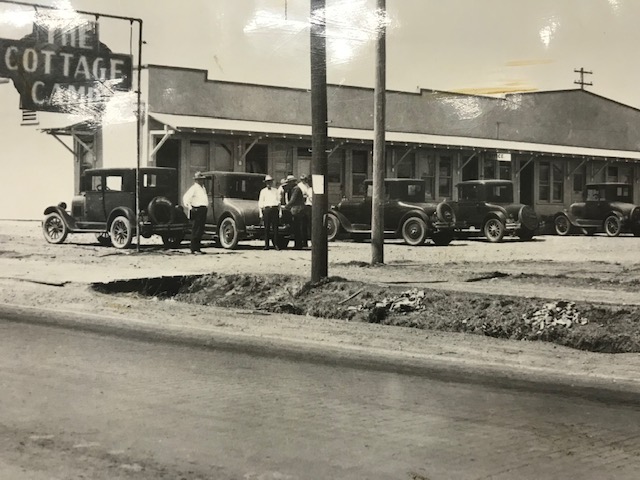 Still in the McLean museum I almost spoke to this “waitress” as a female was called back then. Notice the white uniform and counter set with glass plates and silver. If you have a touch screen you can enlarge the menu and see a 1/4 chicken dinner is only $.90. Since she refused to speak back to me, we bought some postcards and got back on the highway. 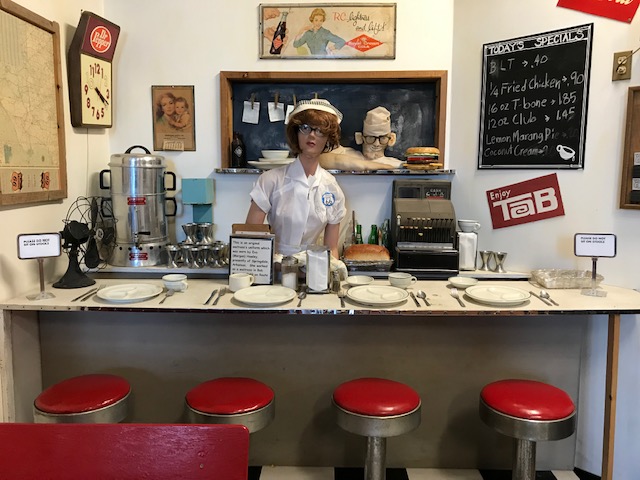 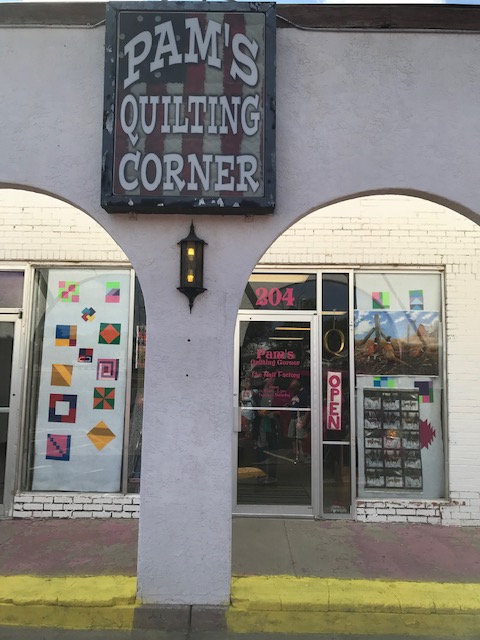 We made it to Pam’s Quilting Corner at 3:30 pm. I am planning to make a Rt 66 quilt and this shop netted me six different fabrics for the project. Linda cut the fat quarters for me and in the course of conversation we took her down memory lane as her father was a 33 year Air Force veteran. Bob being an Army vet and myself the ex of an Air Force vet we had a lot in common. It’s fun to reminisce with someone who has moved as much as I have and been to some of the same bases around the globe. It was almost hard to leave. In the parking lot was the pink SUV pictured below, next to our red baby. When we pulled into Pam’s parking lot Bob’s comment was only a quilter would drive that color car. We didn’t find out who it actually belonged to, but Bob insisted I include it. Personally, I don’t care for that color on a car; it would be great in a blouse or as a flower in a quilt.

I have to admit one of my foibles is sometimes entering the wrong information into MAPS on my phone and we end up in an unexpected place. When we left the quilt shop I entered what I thought was the address for the hotel. When we arrived, we were in a not so nice part of town, and in a very rutted driveway of an unloved tiny house. We were glad no one came out and started yelling at us while I figured out what information I had given incorrectly. Bob was nice and just said we were sight seeing in Amarillo and we drove back the eight miles we had gone and went the other way a couple more. Sometimes it’s a good thing we are long married and not on our first date.

Tonight we are staying in a very new Best Western.  It is contemporary, spacious, and very comfortable. I took a picture of the hallway rugs as an idea for a modern quilt. I also had the opportunity to do a load of laundry because I needed to. During the cycles I finally wrote postcards I have been collecting for the grandchildren. They will probably all arrive at the same time.

When the laundry was done, and Bob finished working for a couple of hours we drove back across town to the Big Texan Steak Ranch. Oh my goodness it was delicious. The parking lot had multiple semi’s lined up on the back street because the truckers were eating there too. 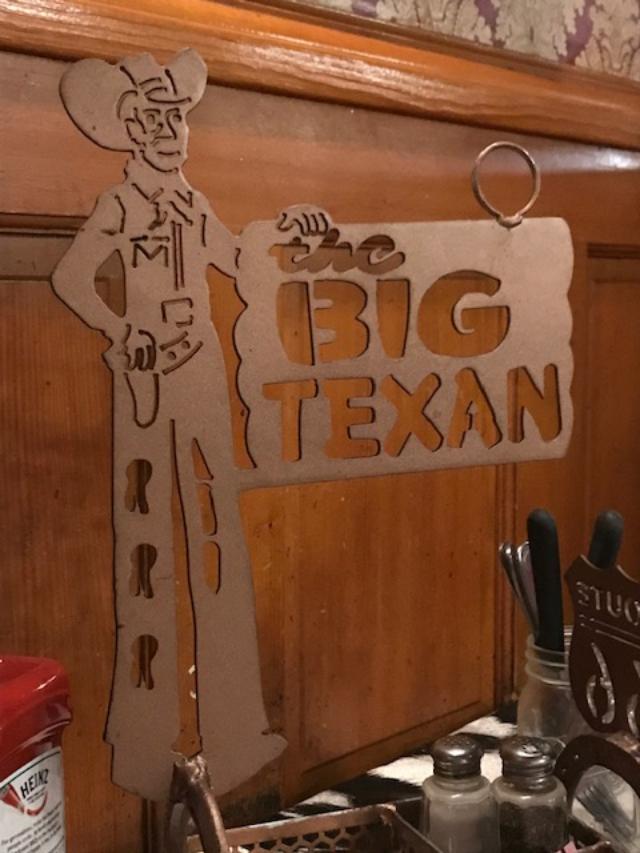 Above is the inside of the Big Texan, full of visitors and decorated with animal heads. Our server, Mike, told us they projected to serve 1,600 meals today counting breakfast, lunch and dinner. The beers are from their brewery and the desserts looked good enough to order one of each. Luckily we have limited space, so left the desserts there. My prime rib was about the best I have ever had and Bob’s strip was also very good.

Below, are two gentlemen that sang us a Willie Nelson tune while we dined. They were aged, excellent musicians and I finally got a taste of country music in Texas. It was a restful, though still as long, day.

In the gift shop of the Big Texan is this pretty creature. No trip to the southwest would be complete without seeing at least one rattle snake. Let’s hope it’s the only one.