This morning we leave on the first leg of our Rt. 66 drive in our six-speed 2009 Red Mini Cooper Convertible, but last night we had a vacation worthy experience at Michael’s Valley Grill on Old Penfield Road in Penfield, NY, a suburb of Rochester.

Let me back up. I belong to an international writing group called Carrot Ranch Literary, whose lead buckaroo is Charli Mills. I got to spend four plus days with Charli in July and now consider her not only a writing mentor but a personal friend. She is studying for her MFA (Master of Fine Arts) on-line and is sharing her classes with us. This week was about deep mapping, which means use all five of your senses to scope out a place and describe it. I think I have that right. So tonight I observed more than just the people I saw. I watched what they did, how they interacted, and got caught up in the fact they were having a good time. I’m not practiced at writing observations so please bear with me.

Old Penfield Road has many restaurants. We eat breakfast at Steve’s Original Diner so often the owner and employees know us by name and vice versa. We like to sit at the counter so we have time to talk and look at pictures of pets/children/and grandchildren. One of the girls has been our coach for this trip. Thank you, Rhonda. On the other side of the street is Charlie Brown’s. We eat dinner there often enough that I get a kiss on the check from the owner when we arrive and leave. We feel at home, enjoy the live music, and take our friends there.

Back across the street again is Michael’s Valley Grill, owned by Michael and Priscilla Petrillo. They have live music too and a friend of mine recently told me if we, my husband and I, liked jazz, we should be going to Michael’s on Saturday night. Tonight, we did. If you have ever been to New Orleans, the restaurant has that feel. What do I mean? On a recent trip to Nola we experienced something you don’t often see in the northeast. Anyway, I don’t. A person was a person. It didn’t matter the color, the clothing, or the make-up; the people that were in the French Quarter when we were there were “just humans” and everyone interacted with everyone else. It was refreshing. I saw and felt the same thing this evening. It was a treat. The band started with Joe on piano, Curtis on drums, then added Terrance on sax and Art on guitar. I’m sorry for the pink hue to the photo, there were red lights on the band. 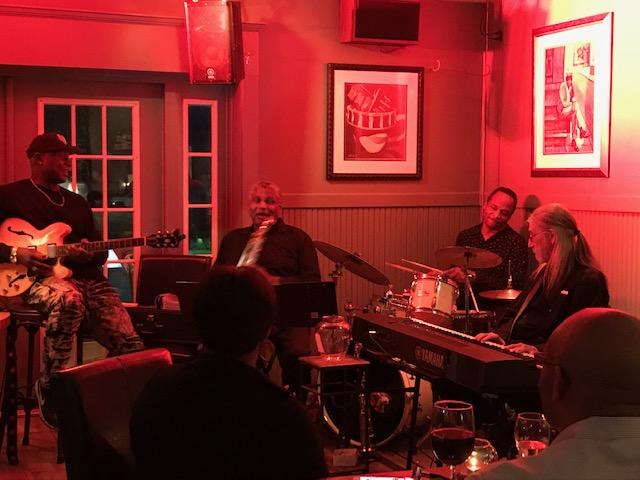 The band, left to right, Art, Terrance, Curtis, and Joe.

Some of their friends and family were in the crowd too. I have to admit something and I hope I don’t offend anyone. Those African American women and men know how to dress. I always feel like a country bumpkin when I’m in a room with them. Not everyone was in a suit or dress, but the ones that were looked mighty fine no matter their ancestry. It seemed most took more time than I did to get ready to go out, but then I came home and spent time in front of the computer. We all have our strengths.

“The Grill’s” walls are lined with artwork; all by David Colon Jr. (www.DColonPaintings.com) One wall has the band members. The watercolor of Curtis is being entered into a northeast competition in the next couple of months. I expect it will do well. Working behind the bar was Max. He’s been there over ten years and knows what people drink. He also knows their habits so no one waited long for a refill. At just the right time he made Priscilla what I think was a chocolate martini which she sipped before leaving for the evening. I asked her if I could photograph the art work. She said, “Of course.” I also asked permission to write about their business. She didn’t ask to read what I wrote before I post it. She also wants to live the next month vicariously through me, so now my plan to blog our trip is even more important to accomplish. Here’s a picture of Max, and one of the watercolors of the band. 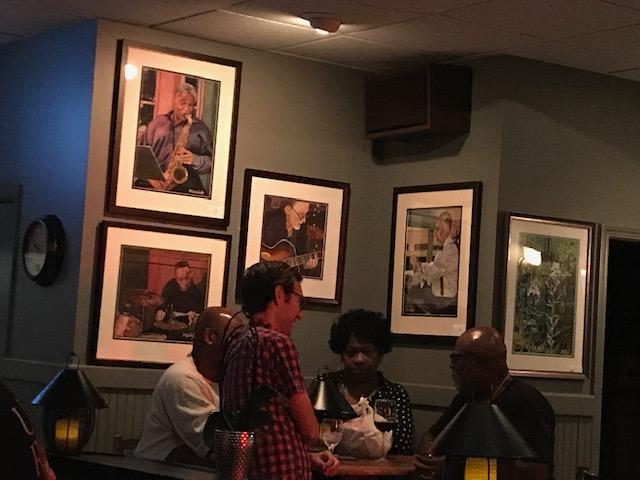 Watercolors of the band and humans.

We got there early enough to watch Michael escort a couple to their table. He allowed the woman to take his arm and walked slowly with her saying they were only going to the fourth table from the door. We were still at the bar when that couple left. The man stopped to talk to my husband about his handle bar mustache. That happens a lot. The mustache is a great conversation starter. We get to know a lot of people that way.

When Art first came in we talked to him, or my husband did, about the fact he was wearing a New York Yankee’s hat. Art deduced right away that Bob is a Red Sox fan, even more so after Bob showed him his socks. About the same time the band was playing a song that included the lyrics, “take your shoe off.” Max and a few others did as they were told, but then put them on again. It made for a light hearted moment and some big smiles. Michael’s was a fun place to be tonight. From where I was sitting at the bar, I could see the cars enter and leave the parking lot. There was one thing in common, there were no inexpensive ones.

If you have the chance, visit Michael’s Valley Grill on a Saturday night. The food is great, the service is top notch, the Nola atmosphere is a breath of fresh air and on Saturday nights the live band is the icing on the cake. No one will rush you out the door so it’s the ideal spot to visit with friends and be pampered. And don’t forget to check out the art work by David that is for sale.